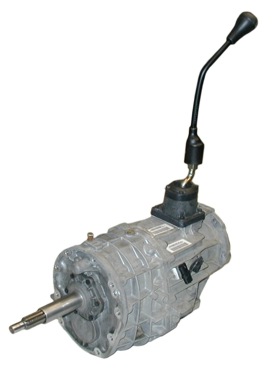 The New Venture Gear 3550 was released in the Jeep TJ Wrangler and XJ Cherokee in 2000, as the replacement to the AX15 transmission. It is also found in Dodge downsized pickups. It's last year in the Jeep was 2004, after which it was replaced by the NSG370 six-speed.

The 3550 is a takeoff from the New Process 3500 as found in smaller GM truck applications, though all external case features are different.

The 3550 is a top-shifting, longitudinally-loaded transmission. It features five speeds with a direct drive fourth gear and an overdriven fifth gear. It is fully synchronized in all gears, except reverse, and has helically cut gears for all speeds.

The NV3550 is 16.7" long and has a cast aluminum case with generous ribbing. With its removable Jeep I6 bellhousing, it measures 23.1". The front bolt pattern is oval shaped and has dowel pins for precision centering alignment to the bellhousing. The front bearing retainer has an integral throwout sleeve for a conventional throwout bearing.

Spline count for the input shaft is essentially always 10 splines x 1-1/8" diameter. However, there are some reports of late-2004 model 3550's in Jeeps featuring a 19 spline x 1" input shafts. The output shaft has 23 splines and is flush with the rear face of the transfer case adapter flange.

The 3550 has a fairly generous torque transmitting capacity (for a transmission of its size) as claimed by its manufacturer. Experience would suggest that it is about the same strength as the AX15, though a small number of failures have been reported to us by our customers. These were probably situations involving extreme terrain or improper use of the overdrive gear.

Popular transmissions to replace the NV3550 for higher performance Jeeps include the SM420, SM465, T18 and NP435 four-speeds. 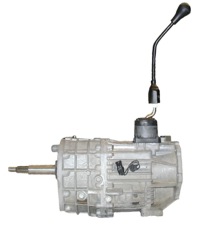 Buick V6, Chevrolet Small Block V6 and V8 conversions to the 3550 are done with excellent success.

The 3550 can be cleanly adapted to Windsor Ford V8 and Ford I6 bellhousings that feature the "butterfly" Ford transmission bolt pattern using this Novak kit.